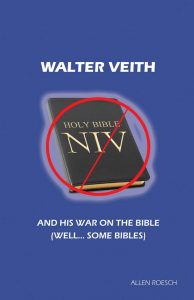 Anyone who is at all familiar with Walter Veith (hereafter WV) is probably well aware that he’s very critical of the modern translations, especially the NIV, and has put quite a bit of effort into trying to convince people how bad they are. Of course, if WV is truly painting an accurate picture of the modern translations, then all the effort he puts into trying to turn people away from them is 100% justified. But… if that’s not the case, and WV isn’t painting an accurate picture—and that’s what I’ll be attempting to show in this study—then what he’s doing can’t be too strongly condemned, because he’s truly turning people away from God’s word, and hardly anything can be worse than that.

I’ll be breaking this study into two parts, both of which will be based on portions of an article I found on his website (https://amazingdiscoveries.org) entitled, “Bible Versions, Does It Really Matter Which?” Immediately below the title it says, “Author: Professor Walter J. Veith, PhD.”

All I ask is that you give what I’m about to share with you an honest look.

Next: WALTER VIETH AND HIS WAR ON THE BIBLE (WELL….SOME BIBLES) PART 1